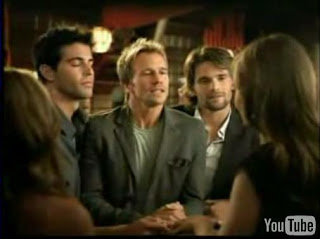 When I first heard that Brett Novek’s Taco Bell television commercial had finally started to air, I began looking for it on YouTube, but it wasn’t there yet. I had a bunch of shows recently recorded on Tivo so I fast forwarded through most of them looking for a Taco Bell commercial. Usually it is the commercials that are ff’d so that was different. I finally found it on an MTV program. It was the 15 second spot so Brett’s screen time was brief.

I knew there was a 30 second spot to be found so I started thinking about what shows might run it in the future so that I could record them and capture it. I tried different shows but didn’t find it. Then I watched Big Brother, which I watch anyway, and lo and behold there it was.

It’s kind of fun to follow the career of someone you admire.

BTW, is VJ Logan playing a Pizza Hut delivery person in a commercial? I can’t tell but it looks like him under the cap that the person is wearing.